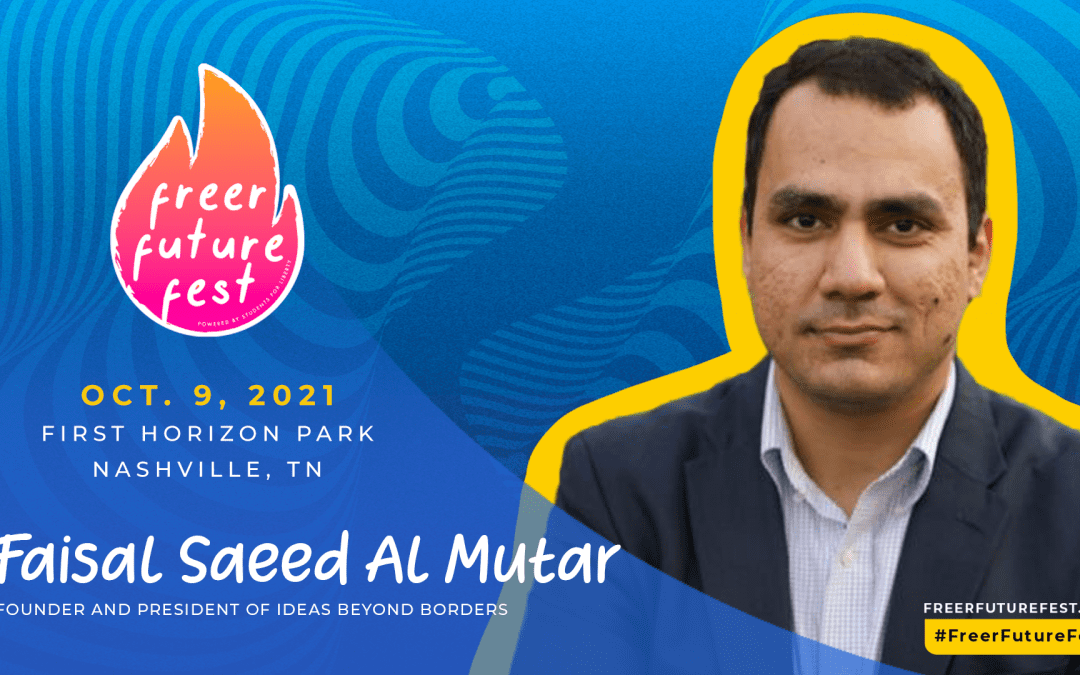 Born in Babylon, and raised in Baghdad, Faisal Saeed Al Mutar experienced the villainy of extremism and authoritarian regimes firsthand. An outspoken writer and activist, he has survived the Iraq Civil War, the murder of his brother, and several kidnapping attempts before becoming a refugee in the United States in 2013.

“The Middle East is the opposite of Las Vegas — what happens in the Middle East doesn’t stay in the Middle East,” he said. “The enemies of freedom are known to the world but those who fight for it aren’t. Freer Future Fest is an opportunity for them to be connected to freedom lovers from across the world.”

A practitioner of counter-extremism on an international scale, he’s spoken at conferences and campuses across the globe about his work for the government and as a private citizen to combat extremism. He founded the organization Ideas Beyond Borders to prevent extremism by empowering people across the globe with access to new ideas and fresh perspectives.

In addition to the speaker’s address, Al Mutar will participate in a panel discussion, Enemy of My Enemy is My Friend — How Dictators Become Friends, to explore how totalitarian dictatorships work together and look for allies in order to win absolute power.

Freer Future Fest is open to the public and members of the press can register to attend for free. If you would like to cover the event or Faisal Saeed Al Mutar’s panel, please contact Students For Liberty’s PR Strategist Mariam Gogolishvili at [email protected].

More information for the press can be accessed here.

Freer Future Fest is an annual student festival hosted by Students For Liberty. Freer Future Fest brings together some of the most respectable and well-known speakers and activists in the liberty movement from around the globe to discuss the philosophy of liberty and host an open discussion with students across the ideological spectrum.

Learn more about the Freer Future Fest at www.freerfuturefest.com.