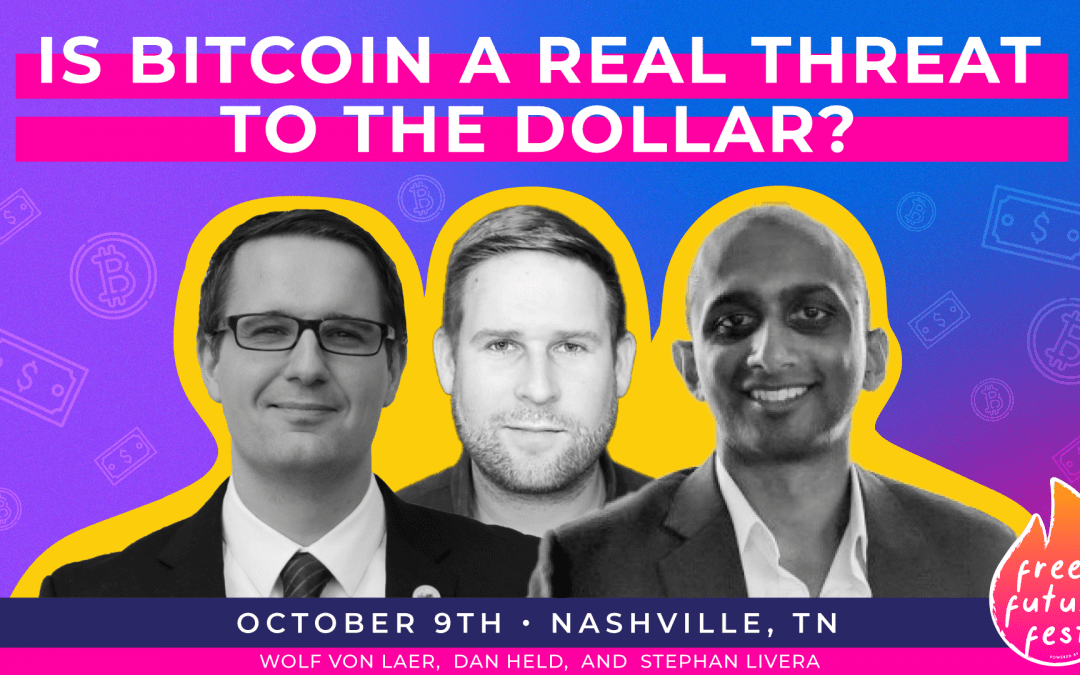 NASHVILLE, TN — Serial Bitcoin entrepreneur Dan Held, together with Bitcoin podcaster Stephan Livera and CEO of Students For Liberty Dr. Wolf von Laer will join Freer Future Fest to discuss why Bitcoin might be a real threat to the dollar. Freer Future Fest, an annual festival hosted by Students For Liberty, will take place on October 9, 2021, at First Horizon Park in Nashville, TN.

Dan Held is a serial Bitcoin entrepreneur with experience across five Bitcoin companies. Held is currently director of growth marketing of Kraken, a U.S.-based cryptocurrency exchange and bank. His former company, Interchange, a portfolio reconciliation tool for crypto institutional traders, was acquired by Kraken in 2019.

Prior to that, Held was at UberBitcoin on rider growth/global data. Held built some of the most popular early crypto products including ChangeTip (acquired by AirBnB), and ZeroBlock which was acquired by Blockchain.com in the second-ever Bitcoin acquisition.

Stephan Livera is a host of the Stephen Livera Podcast (SLP), recognized in the industry as one of the world’s leading Bitcoin podcasts: it has a 4.9 star average across 600+ ratings globally and over 2M downloads, being ranked in the top 0.5% of podcasts globally. As an individual, Stephan is ranked in the top 10 globally on the hive.one/bitcoin cluster listing, an algorithmic scoring of relevance or influence in the Bitcoin space.

Dr. Wolf von Laer is the CEO of Students For Liberty. He holds a Ph.D. in political economy from King’s College London and a master’s in Austrian Economics from Universidad Rey Juan Carlos. His views on Bitcoin have appeared in the Wall Street Journal, Foreign Policy, Forbes, Huffington Post, Bitcoin Magazine, Coindesk, and CSPAN.

On the panel discussion Is Bitcoin a Real Threat to Dollar, Livera will moderate the conversation between Held and von Laer to bring out their perspectives on Bitcoin’s long-term prospects.

Freer Future Fest is open to the public and members of the press can register to attend for free. If you would like to cover the event or the Bitcoin panel, please contact Students For Liberty’s PR Manager Julia Kril at [email protected].

More information for the press can be accessed here.

Freer Future Fest is an annual student festival hosted by Students For Liberty. Freer Future Fest brings together some of the most respectable and well-known speakers and activists in the liberty movement from around the globe to discuss the philosophy of liberty and host an open discussion with students across the ideological spectrum.